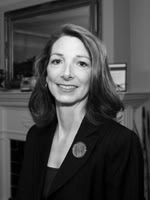 Prior to joining the firm, Stephanie served as an Assistant Attorney General for the State of Missouri. During her tenure as an AAG, she represented various state agencies including professional licensing boards, the Missouri Department of Agriculture, and the Missouri Department of Natural Resources in administrative, state, and federal courts. After leaving government service she maintained a general, civil trial, and appellate practice until joining the firm.  Stephanie is Of Counsel.

Represented senior executive of a publicly traded multinational drilling company regarding a Foreign Corrupt Practices Act investigation. No claims were pursued against the client.

Represented a vice-president of a food company concerning a plant explosion that killed 14 people. Prepared client for testimony before a United States Senate Subcommittee. No charges were filed against the client.

Represented a bond trading company and its principals regarding a $68 million wire fraud and bank fraud investigation.  No charges were filed against the firm's clients.

Represented an international company in a $9 million embezzlement scheme carried out by the former in-house counsel. Successfully located and liquidated assets obtained with stolen money for the firm's client.

Represented the University of Texas System/Board of Regents in impeachment proceedings by a Select Committee of the Texas Legislature against an individual board member.

Represented the chief compliance officer of a former national mortgage company regarding civil claims under the False Claims Act (FCA) and Financial Institutions Reform, Recovery, and Enforcement Act of 1989 (FIRREA). The matter settled favorably for the client.

Represented an individual in criminal proceedings for a fraudulent billing and kick back scheme from a large, privately held multinational corporation. The client received favorable sentencing results.